A brief interview with Alan Gogoll 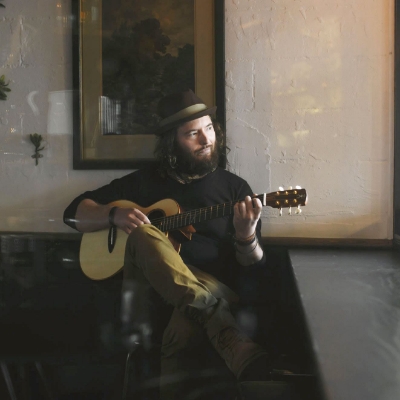 Alan Gogoll is an instrumental guitarist from Tasmania, Australia, particularly known for his incredible Bell Harmonics technique and his beautifully written music.

Over the last few years, he's racked up over 100 million videos views on Facebook and YouTube and continues to fascinate viewers and listeners everywhere. He's also the most followed original acoustic guitarist on Facebook in the world, and amongst the top few on Spotify, Instagram and YouTube.

We've known Alan for a while now, so we took the opportunity to ask him a few questions!

G7th - So when did you start playing the guitar?
Alan Gogoll - I first picked up a guitar when I was 5 years old, which was a Yamaha classical I came across in the attic. I had lessons for a few years after which I started exploring the guitar myself and have been ever since.

G7th - can you tell us a bit about the guitars you're currently playing?
AG - I'm currently playing several aNueNue guitars, the latest of which are two signature models made from Cocobolo back and sides and Moon spruce top which I'm planning a new video series for. I'm also playing and recording a Tasmanian built Paul Mineur guitar which features in many of my videos and recordings. I'm extremely excited to be currently having a guitar built by Ted Astrand in Sweden, which I'll be picking up in May next year at a guitar showcase in Japan.

G7th - who are the artists that have influenced your playing and writing over the years?
AG - I've always been a big fan of pop music and grew up listening to Nirvana, the Red Hot Chili Peppers, Radiohead, Smashing Pumpkins, Arcade Fire, Death Cab for Cutie. I also enjoy the heavier side of music like metal and soundscape based projects. I started writing my first songs when I was in primary school and have just progressed from there.

G7th - Your bio on your website begins with a Bible quote from Psalm 108. How does your faith influence your music?
AG - I'll start with a quote by C. S. Lewis - "I believe in Christianity as I believe that the sun has risen: not only because I see it, but because by it I see everything else."
I'm a believer that music starts in the heart, is refined in the head and expressed through the hands. My faith has been worked out in my mind and is now carried in my heart, which I express through my playing. I'll end with another quote by Bach that rings true for me, that "The aim and final end of all music should be none other than the glory of God and the refreshment of the soul."

G7th - you are best known for your stunning and original "bell harmonics" technique. Can you tell us the story of how you discovered it and have since developed it?
AG - I've always had a fascination with harmonics. I really love how they are such a unique and delicate sound yet take so much precision and difficulty to execute, and when they don't work really don't work but when they do it's something magical. When I was 9 I wrote my first harmonic song using natural harmonics and proceeded to incorporate harmonics over the years when I could. It wasn't until I was about 20 when I cut one of my hands and couldn't play for a while that I started to experiment with artificial harmonics and looking at new ways they could be produced and incorporated. It does take a lot of work for me to keep up the technique and write new pieces, so I think my creative will be less as I further refine the technique but I do like now being able to focus on quality rather than quantity of work.

G7th - What was it like when the "Mulberry Mouse" video started collecting millions of views on Facebook?
AG - Mulberry Mouse was my first truly viral video and was a big step in building my social media presence as well as showing me I could make a sustainable living from producing music and recording videos through watching me play, then finding my music on Spotify and iTunes. It also showed me how much people really enjoyed the flashier side of my playing and Bell Harmonics and that a nicely shot video without multiple cameras and editing was just as effective, if not more so than a fully produced video. It also helped to solidify my direction in terms of reaching a global audience and that people really responded well to what I'm doing.

G7th - any plans for a UK or US tour in the future?
AG - As a solely independent artist with no management or assistance, I barely find time to even practice the guitar most days on top of admin and managerial tasks so I have no plans for the UK and US as far as tours go. Writing songs and recording videos is how I see myself continuing to reach people.

G7th - you've been a G7th capo user for many years. What is it about them that made you choose them over other capos?
AG - I was trying to think back to when I first started using G7th capos but they've been my capo of choice for so long now that I can't even remember! I've owned several versions over the years dating back to some of the earlier designs and even from the beginning they've always been outstanding works of craftsmanship and are just so quick and intuitive to use. I still own each one and after all these years and uses they all work just as well as the day I got them. I believe G7th have now come up with the perfect capo designs and are not just making capos anymore but works of art. I see the ultimate example of this in the new Heritage capo which I can't wait to begin using and recording with. I've used many capos over the years but for me G7th will always be my capo of choice. I can't recommend the Performance 2 capos enough and for anyone looking for the absolute pinnacle of capo design with audiophile features and aerospace construction then in my mind the Heritage is the only choice.

Alan uses 18kt Gold Plate Performance 2 capos, both steel string and classical, and a standard width Heritage capo, all engraved with his signature in our Custom Shop. You can read more about Alan on his Artist page.